The mechanisms of faunal dispersal across the major ocean basins are key unknowns to our understanding of the present-day biogeography of deep-sea fauna. In particular, the hypothesized connections are poorly known between geographic separation, depth difference, and ocean circulation patterns surrounding isolated marine habitats and both the historical migration of marine fauna and the modern rates of gene flow. There is a growing awareness that the interaction of these factors with the life history of individual species is important to faunal dispersal in the oceans. Seamount chains, present in all ocean basins, provide stepping stone habitats that are semi-continuous and are likely to have a fundamental impact on the faunal dispersal patterns controlling regional biogeography and diversity of deep-sea fauna. Two important aspects of seamount chains that favor biogeographic studies are that they typically host abundant faunal assemblages unique to the surrounding deep sea and that they are often oriented perpendicular to both continental shelves and mid-ocean ridges. Hence, they may form faunal pathways between the continental edge and the mid-ocean ridge, across large stretches of deep ocean basin, and across boundary currents. In addition, there are close interactions between hydrographic processes and seafloor features that again may promote or impede colonization and dispersal; these interactions span a range in scale from the deflection of major oceanographic currents, to the promotion of local upwelling and enhancement of nutrient delivery, to the scouring of seafloor sediments producing substrate favorable to recruitment by sessile organisms. Another constraint on dispersal includes the retention of planktonic larvae by circulation patterns with closed streamline flows above a seamount (e.g., Taylor caps). Such circulation could restrict seamount fauna from utilizing seamounts as stepping stones. This could potentially shift population dynamics of the seamount fauna to essentially evolve in situ. Identifying the mechanisms that drive the distribution of deep-sea species in space and time is critically important to understand the forces that structure deep-sea biodiversity. Our research focuses on understanding mechanisms of larval dispersal and evolutionary history among disjunct and isolated habitats in the deep-sea. Through comparative molecular systematic and phylogeographic approaches we seek to directly test predictions of genetic structure derived from the historical or geological formation of the seamount chains.

Seamounts represent a large range of habitats for benthic organisms, with summits that typically spanned ~900-3000 meters water depth, bottom types that range from bare basalt to large sediment ponds, and oceanographic settings that range from a deep western boundary current to abyssal quiescence, this seamount chain provides a wide array of habitat types to study what controls species distribution. Genetic relationships among species may, or may not, be related to this wide range of habitat availability. The influence of historical population fluctuations (i.e., bottlenecks and radiations) associated with the seamount chains and historical gene flow are being examined to elucidate the degree to which geological formation of these seamounts has shaped the evolution of these deep-sea faunas. By comparing patterns exhibited by multiple species with different dispersal strategies, we can assess the relative roles of current regime, habitat, and age of the seamount have played in controlling genetic variation. If seamounts are genetically isolated, one would expect that the formative geologic and hydrographic history associated with a given seamount would play a dominant role in the evolution of the constituent fauna (and their populations). We are assessing the rates of gene flow among between seamounts and the impact of geological/hydrographical processes on genetic diversity and structure. Our goal is to understand how population connectivity, life history strategy, and microevolutionary processes (e.g., oceanic circulation) interact with historical (e.g., geology) and dynamic (e.g., currents) processes to shape biological (and genetic) diversification at seamounts.

Oasis Seamounts of the Eastern Pacific 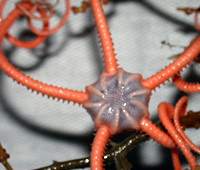 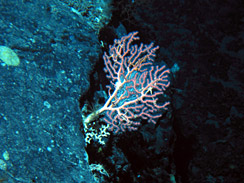