IntroductionSeamounts are common geologic seafloor structures throughout the world’s oceans and thought to number approximately 100,000 globally (Rogers 2004). Their unique characteristics such as hard substrata, steep gradients, interaction with currents, induced upwelling, retention of nutrients, geographic isolation, and high degree of endemism make them important parts of the ocean floor. They have been hypothesized to play a key role in ocean biodiversity as potential stepping-stones for trans-oceanic dispersal, refugia for relict populations, and areas of speciation (Rogers 1994; Rogers 2004). Despite their unique and important role as a significant part of the deep-sea benthic habitat, their contribution to deep-sea biodiversity is not well known.The characterization of the role of seamounts in deep-sea biodiversity is all the more urgent with the increasing pressure of deep-sea fisheries. With the decrease in pelagic fisheries, many trawlers and long liners are turning to deeper waters to maintain catches, exploiting deep-sea species such as Orange Roughy, Grenadier and Ling, commonly found on seamounts (Clark 2001; Koslow et al. 2000). Such deep-sea fishing techniques have been shown to destroy benthic habitat, in particular the coral habitat upon which many invertebrates live (Kaiser 1998; Probert 1999; Probert et al. 1997; Thrush et al. 1998). Without further study, the full extent of the impacts of deep-sea fisheries on seamount fauna may never be understood.Over 150 invertebrate species were collected from Bear, Gregg, Manning, and Muir seamounts over the past two years in the Northwest Atlantic. Ophiuroids and goose barnacles were found in abundance on these seamounts and so were ideal candidates for genetic analysis to investigate the level of gene flow between the different populations. Ophiuroids are one of the most common deep-water invertebrate benthic groups (Gage and Tyler 1991). Asteroschema sp. is a basket star and observations during cruise AT7-35 showed a single individual living on the coral Metallogoria and many individuals on Paragorgia (T. Shank pers. com.). Similar associations have been shown for other Asteroschema species with the gorgonian Ellisella barbadensis (Emson and Woodley 1987). Barnacles are one of the most common marine crustaceans in the world and some have been shown to be associated with corals in the past (Mokady and Brickner 2001; Mokady et al. 1999; Perez-Losada et al. 2004). The poster presents the preliminary results of a study to characterize the fauna of these Northwest Atlantic Seamounts. Bear, Gregg, and Manning seamount are part of the New England Seamount Chain and Muir Seamount is north of Bermuda. We examined levels of endemism and the role seamounts play in deep-sea biodiversity through molecular systematic and phylogeographic studies of ophiuroids and barnacles.

Project GoalsThis study examined the role of seamounts in deep-sea biodiversity by characterizing the level of gene flow and endemism of the fauna found on Bear, Gregg, Manning, and Muir. Two species of ophiuroids (Asteroschema sp. and an unknown sp., herein called sp. 6) collected from Bear, Gregg, Manning, and Muir and two species of barnacles collected from Bear, Gregg, and Muir were analyzed using phylogenetic and molecular systematic techniques in the hopes of elucidating the degree of connectivity between the seamounts. The general project goals are:

MethodsTwo ophiuroid species and two barnacle species were analzyed using the 16S nuclear marker and the 28S nuclear marker respectively. DNA was extracted through the use of a Qiagen Extraction kit. Due to difficulties in extraction, a 5% Chelex extraction protocol was used for the majority of ophiuroid samples (Walsh et al. 1991). DNA was amplified using the 16Sar, 16Sbr and 28y, 28z primers by PCR with an annealing temperature of 45°C for the ophiuroids and 56.2°C for the barnacles. PCR reactions were purified using either a Qiagen QIAquick PCR Purification kit or the Promega Wizard Plus Minipreps DNA Purification System. The samples were then direct sequenced using an AB 3730XL capillary sequencer, aligned with ClustalX and by eye and analyzed using the PAUP software. A Kimura 2-Parameter model was used for the calculation of all genetic distances.

The Muir seamount populations have the greatest mean genetic distance from the rest of the populations of ophiuroid sp. 6 and Asteroschema implying the geographic isolation of this seamount. 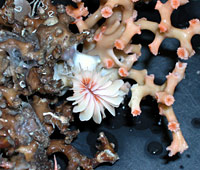