In 2001, an off-axis peridotite-hosted hydrothermal system supporting up to 60 meter tall carbonate-brucite chimneys was discovered on the Atlantis Massif (30°07.4’N, 42°07.24’W; 700-800m depth). In 2003, a second interdisciplinary expedition returned to this site, the Lost City Hydrothermal Vent Field (LCHF) to understand the linkages among hydrothermal alteration of the mantle, geochemistry, and biological ecosystems within this environment.

The Lost City vent field features many components that offer opportunities to identify novel ecological niches and new species (with new adaptations) associated with potentially unique (yet prevalent) chemical habitats. These components include Lost City’s close proximity (<15 kilometers) to, yet pronounced depth difference (~3000m) from the Mid-Atlantic Ridge floor, and unique fluid chemistry derived from serpentinization reactions and production of carbonate chimneys at the seafloor.

Lost City also offers the opportunity to identify the evolutionary relationships of chemosynthetic fauna in comparison to those endemic to vents and seeps. Preliminary characterization of actively venting carbonate habitats (~10-40?C) indicated they were dominated by several species of gastropods and amphipods, including Bouvierella curtiramaand Primno evansi.

The dominant mobile fauna near actively venting edifices was a purple-gray ~10 to 30cm-long cut-throat eel (Synaphobranchus kaupi). Wreckfish (Polyprion americanus) were also abundant throughout the field as well as number of other unidentified fish.

Preliminary observations indicate that the upper pelagic and mid-Atlantic deep-sea fauna (>200m) have a marked presence on Lost City faunal composition (e.g., the presence of pteropods, forams, and amphipods), though some vent fauna are also present. A cursory comparison of biomass between the dominant faunas of Lost City, Mid-Atlantic Ridge, East Pacific Rise, and Juan de Fuca, suggests that Lost City supports significantly lower biomass, with the large majority of the dominant fauna on the order of hundreds of microns or less in length.

Results from phylogenetic studies of Lost City species are being presented to shed light on the role of depth, fluid chemistry, and the presence of non-endemic species in controlling community composition. These findings are being used to examine the role of Lost City-type vent fields (a potentially ubiquitous style of venting along the Mid-Atlantic Ridge) as stepping stones or evolutionary refugia for the chemosynthetic fauna along the Mid-Atlantic Ridge and other recently discovered sites along the Southwesternern Indian Ridge and seamounts of the Mariana arc region. 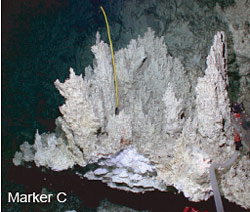 We extend our sincerest gratitude to the officers and crew of the RV Atlantis, the submersible pilots of DSV Alvin, Debbie Kelley, Jeff Karson and the members of the Lost City Scientific Party for their invaluable assistance. Many thanks to the ABE Group, and map-maker Mike Jakuba for their expertise.