We are assessing, through an integrated program, the factors responsible for biological community structure at hydrothermal vents in the area between 9°49.61’ and 9°50.36’N (known as the Biologic-Geologic Transect) along the crest of the East Pacific Rise (EPR). The objective of this multi-disciplinary effort is to gain a fundamental new understanding of the biological, chemical, and physical characteristics, variability, and processes affecting organism community structure (from microbes to megafauna) in deep-sea vent systems. Study sites have been selected that should maximize integration with a variety of geophysical (e.g., seismic) and geochemical (e.g., major element) studies being proposed by other workers. We are addressing the following broad hypotheses: (1) Dramatic changes in biological community structure at vents are correlated with seismic, tectonic and/or volcanic activity within the region; (2) Vent fluid chemistry (principally sulfide speciation and concentration) is the predominant factor controlling the structure of vent communities; and (3) The structure of microbial communities associated with diffuse flows varies with time, temperature, and in response to differences in oxygen,iron, manganese and sulfur speciation. At several of the 9°50’N vent sites that formed during an April 1991 eruptive event in the area,mussels now dominate the faunal assemblages, while other habitats within the region are dominated either by Tevnia jerichonana or Riftia pachyptila tubeworms. Our approach builds upon the extensive data sets obtained at these sites over the past decade and proposes a series of in situ measurements, sampling regimes and manipulative experiments conducted using DSV Alvin to gain a more detailed understanding of factors controlling biological community structure in these hydrothermal ecosystems. To this end, in situ voltametric sensor packages will be used to measure H2S/HS-, FeS, Fe2+, Mn2+, O2, pH and temperature over time in a variety of vestimentiferan and mussel microhabitats from which fluid samples will be obtained for microbiological characterization.

Manipulative experiments are focused on removal and subsequent exclusion of mussels from selected regions of mussel-dominated assemblages, coupled with detailed geochemical and microbiological characterization of associated microhabitats before and after mussel removal. Subsequent recruitment and colonization within exclusion cages in denuded and control areas are being followed through successive removal and analysis of deployed basalt blocks over time. Concomitant chemical, physical and microbiological analyses of fluids permit correlation of these parameters with temporal changes in community structure. 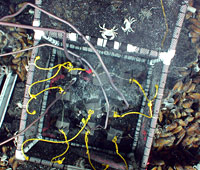 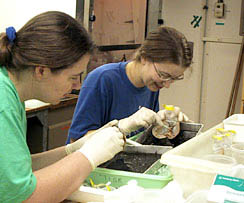