Biologists have long proposed that the chemical compositions of vent fluids serve as settlement cues for vent-dependent fauna to colonize vents along mid-ocean ridges; however, this hypothesis remains largely untested. In addition, microbial community composition in vent fluids and the development of microbial biofilms at vent openings would be expected to vary in response to vent fluid chemistry, and may facilitate or inhibit the settlement of invertebrate species. A major objective of this research is to understand biological/geochemical interactions during initial colonization of basalt at deep-sea hydrothermal vents, through time-series studies that combine molecular genetic characterization of colonists and in situ measurements of fluid chemistry. We are conducting an interdisciplinary pilot study of the microbial and invertebrate species colonization of basalt panels in conjunction with co-located, in situ, time-series detection of dissolved H2, H2S, pH, and temperature at a hydrothermal vent on the East Pacific Rise. Our study involves deploying and recovering a series of settlement panels in close proximity to an in situ chemical sensor for 3- to 9-day time periods. The settlement panels are preserved in situ, and we will evaluate the bacterial and archaeal species diversity in developing biofilms. Small recovered colonists, that are not amenable to species identification based on morphology, are identified using molecular methods developed at WHOI. We hope to gain fundamental insights into how hydrothermal fluid chemistry and microbial biofilms affect larval settlement on basalt substrates, the first step in larval recruitment and the ultimate development of megafaunal assemblages at vent sites. 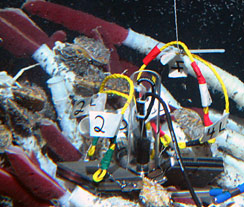